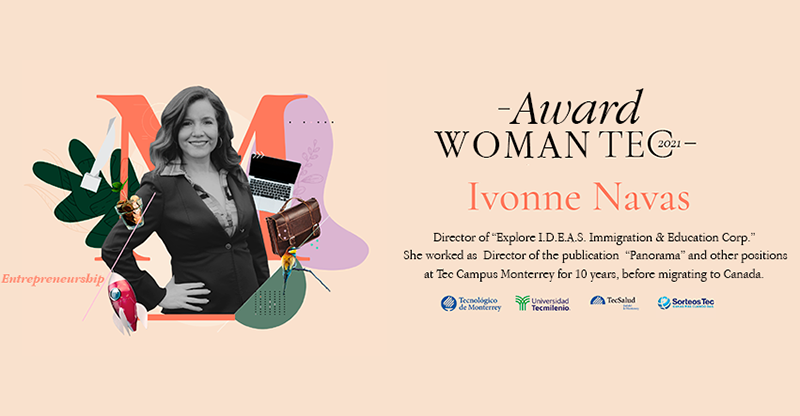 The “ITESM” known as “Tec de Monterrey” is positioned among the top 200 universities in the world and one of the most prestigious private universities in Mexico. https://www.topuniversities.com/universities/tecnologico-de-monterrey

As part of its year 2030 vision where human flourishing is fundamental to the development of communities, “Tec de Monterrey” selected 23 winners of the award “TEC WOMAN 2021” covering nine different categories with the aim of recognizing the contributions of outstanding women inside and outside Mexico to promote their empowerment, to reward their achievements and make their work visible; important steps in stimulating gender equity and through these recognitions, to contribute to social development.

The values upon which the Tec Women’s Award is based on, are: sorority, inclusive language; gender equality, self-care, safe zone, women’s voice and visibility. This initiative, promoted by the Centers for Inclusion, Social Impact and Sustainability and the Center for the Recognition of Human Dignity, has boosted the potential of women by recognizing the stories of those who are part of the Institution and who, with their work have contributed to the promotion of gender equity from various disciplines, including entrepreneurship.

The Winners will receive as a prize a symbolic stylized replica of the sculpture: “MULIERE AMET” (name from Latin: “Woman Defiant” inspired by the sculpture “Fearless Girl” by the artist Kristen Visbal, created with the intention of empowering women around the world and symbolizing a call to gender equality and leadership. https://www.fearlessgirl.us/about-day-of-the-girl/

The “ITESM” Monterrey Institute of Technology and Higher Studies, known as “Tec de Monterrey is a private university founded in 1943 in Monterrey, Mexico. Since its foundation, it has increased its national and international presence to 31 campuses in 25 cities in Mexico, as well as representation in Asia, Canada, Europe, the United States and Latin America, positioning itself among the best educational institutions in Mexico and the world with more than 90,000 students and 9,500 professors. It offers a comprehensive educational system that offers Doctorates (PhDs), Master’s Degrees, Bachelor’s, Engineering and Baccalaureate.

Representative by the Canadian government. She created her company with the mission of offering enriching opportunities for international studies, work or emigration to citizens to and from around the world.