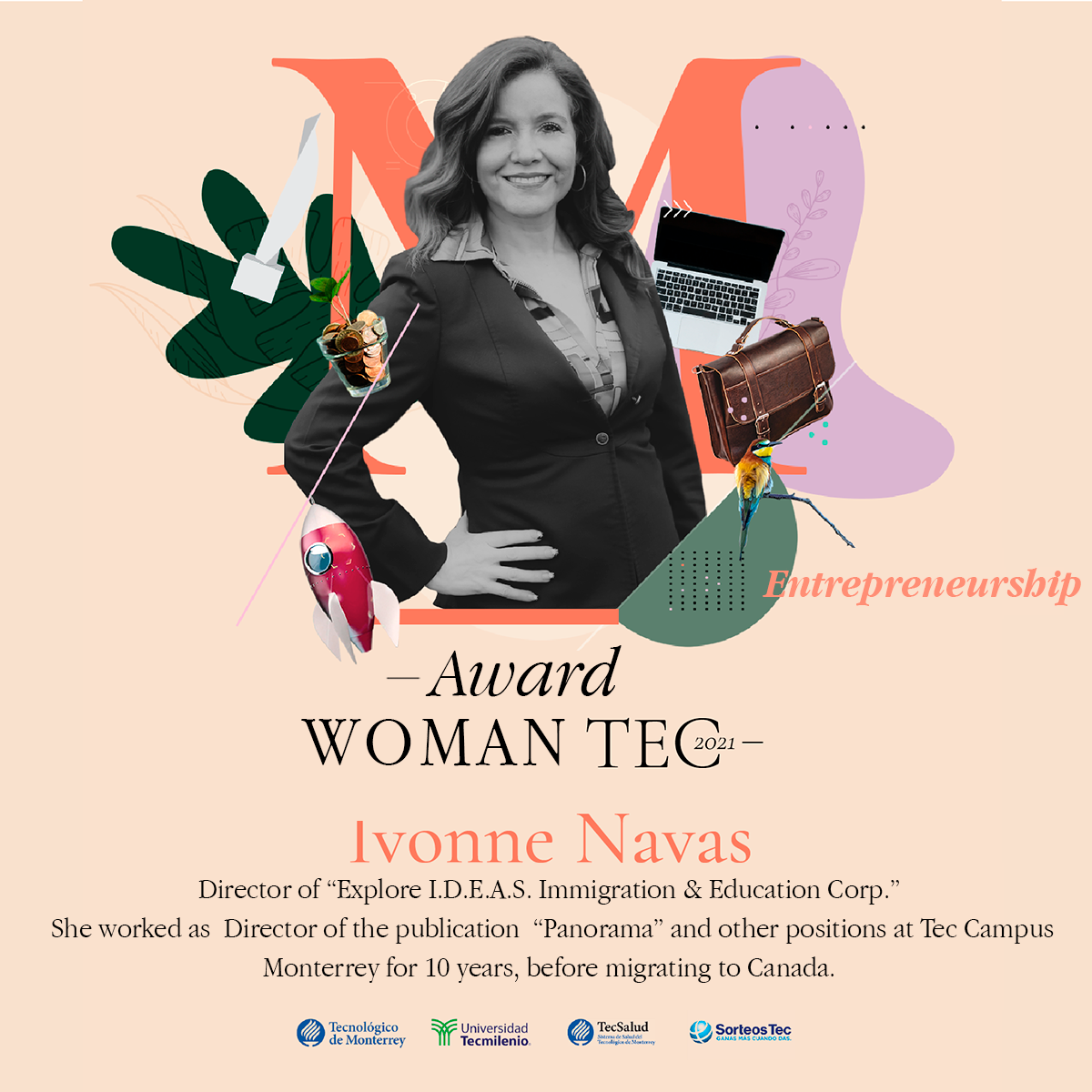 The “ITESM” known as “Tec de Monterrey” is positioned among the top 200 universities in the world and one of the most prestigious private universities in Mexico.   https://www.topuniversities.com/universities/tecnologico-de-monterrey

As part of its year 2030 vision where human flourishing is fundamental to the development of communities, “Tec de Monterrey” selected 23 winners of the award “TEC WOMAN 2021” covering nine different categories with the aim of recognizing the contributions of outstanding women inside and outside Mexico to promote their empowerment,  to reward their achievements and make their work visible; important steps in stimulating gender equity and through these recognitions, to contribute to social development The values upon which the Tec Women’s Award is based on, are: sorority, inclusive language; gender equality, self-care, safe zone, women’s voice and visibility.

This initiative, promoted by the Centers for Inclusion, Social Impact and Sustainability and the Center for the Recognition of Human Dignity, has boosted the potential of women by recognizing the stories of those who are part of the Institution and who, with their work have contributed to the promotion of gender equity from various disciplines, including entrepreneurship.

The Winners will receive as a prize a symbolic stylized replica of the sculpture: “MULIERE AMET” (name from Latin: “Woman Defiant” inspired by the sculpture “Fearless Girl” by the artist Kristen Visbal, created with the intention of empowering women around the world and symbolizing a call to gender equality and leadership.

The “ITESM” Monterrey Institute of Technology and Higher Studies, known as “Tec de Monterrey is a private university founded in 1943 in Monterrey, Mexico.  Since its foundation, it has increased its national and international presence to 31 campuses in 25 cities in Mexico, as well as representation in Asia, Canada, Europe, the United States and Latin America, positioning itself among the best educational institutions in Mexico and the world with more than 90,000 students and 9,500 professors. It offers a comprehensive educational system that offers Doctorates (PhDs), Master’s Degrees, Bachelor’s, Engineering and Baccalaureate.

She is the winner of multiple awards and recognitions as an entrepreneur and specialist in International Education and a Regulated Immigration Consultant to Canada (RCIC)/ Authorized Representative by the Canadian government.  She created her company with the mission of offering enriching opportunities for international studies, work or emigration to citizens to and from around the world.

By Red Global Mx BC Canada 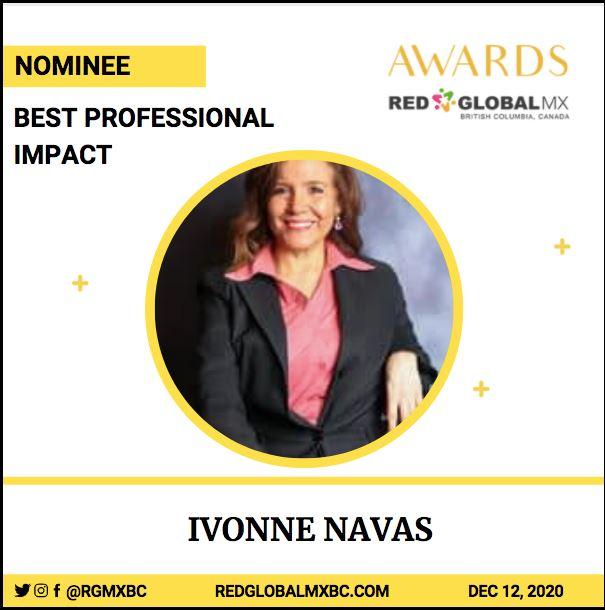 by the Red Global Mexico- Canada BC Chapter.

This category recognizes talented Mexicans outstanding in their professional careers and who have removed obstacles and achieved successes in their home country and abroad. They are recognized as academics, researchers, creators and professionals who have exceeded expectations and true innovators.

The Red Global is a non-profit, independently operated organization and a diaspora program by the Mexican Ministry of Foreign Affairs, integrated by international professionals with a mandate of strengthening the links that tie three strategic areas: innovation & technology, education & research, business & entrepreneurship.

By ILAC. (The International Language Academy of Canada) 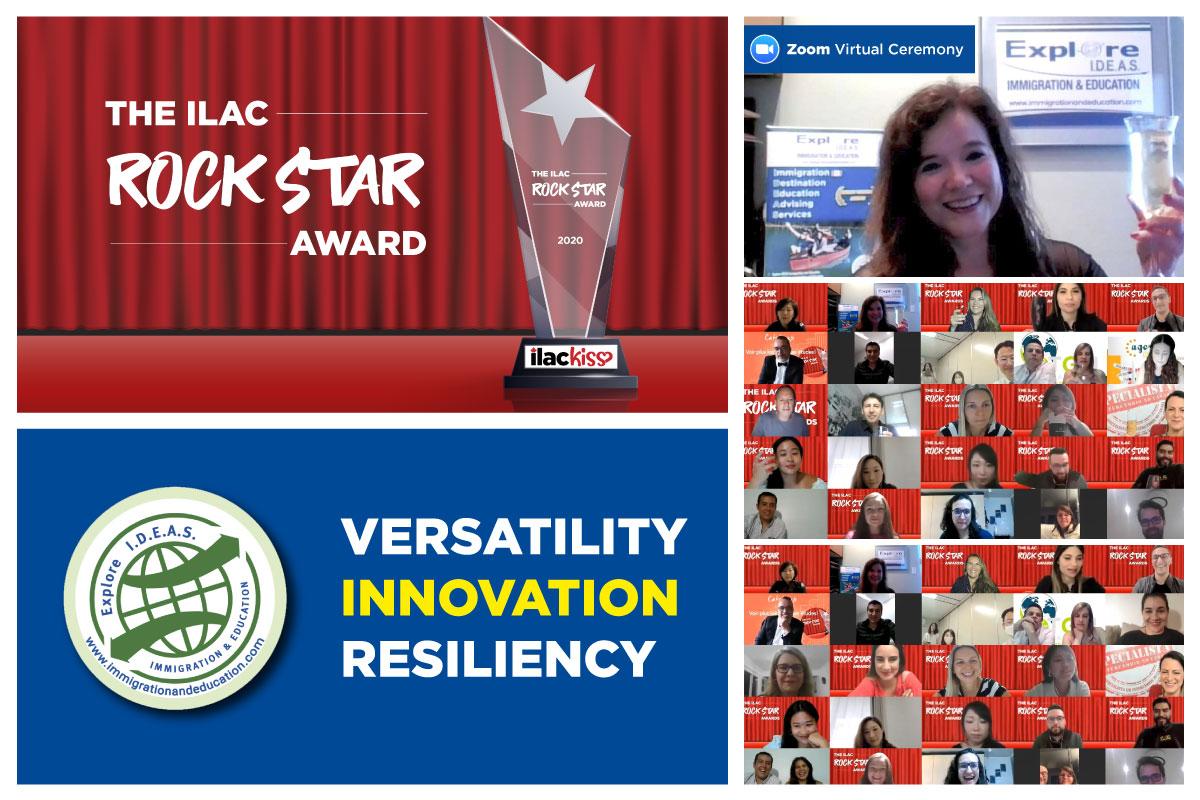 ILAC recognized Ivonne Navas and her agency “Explore I.D.E.A.S Immigration & Education Corp.” as a leader within the INTERNATIONAL EDUCATION industry and a devoted contributor.  Her efforts in demonstrating versatility, innovation and resilience to new and impactful business circumstances and adversities during the challenging times of COVID-19, were celebrated and rewarded during a virtual ceremony, shared with members of strategic alliances and successful agencies around the world.

ILAC is recognized as the most awarded language schools in the world, with campuses in Toronto and Vancouver. It receives students from more than 75 countries, positioning itself as one of the schools with the most multicultural diversity.

AWARD: ENTREPRENEUR OF THE YEAR. “EYA” 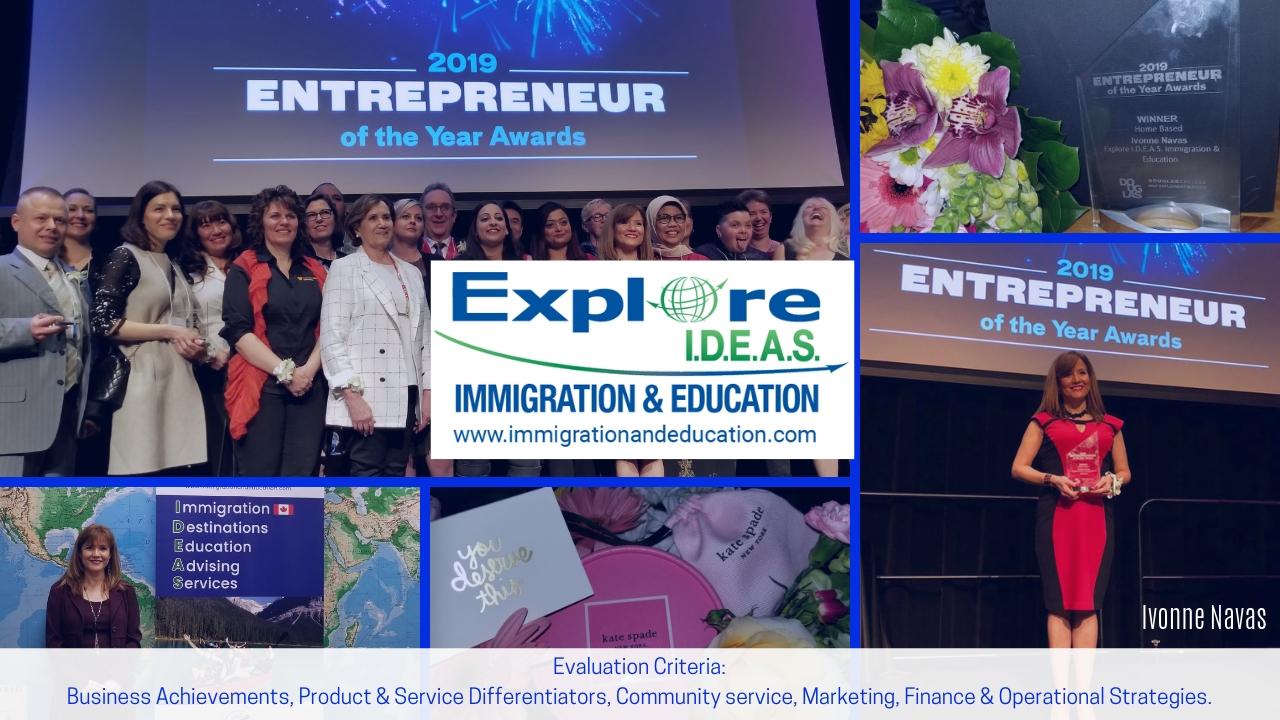 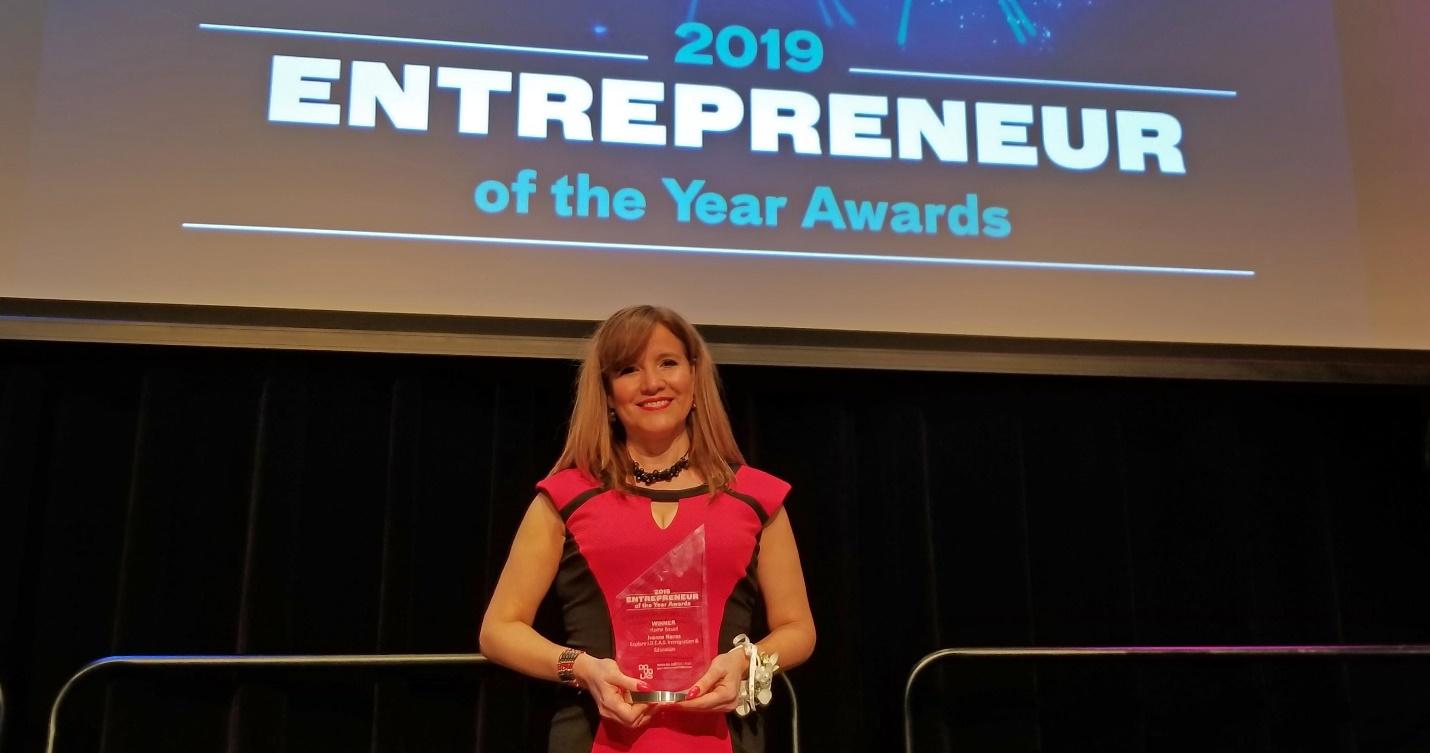 Ivonne Navas and her agency “Explore I.D.E.A.S Immigration & Education Corp.”  won the award “ENTREPRENEUR OF THE YEAR”  by the Douglas College.

The “EYA” event celebrates the success of graduates from the entrepreneurship program by the prestigious “Douglas College”, a public educational institution. Such a program is recognized as one of the largest and most successful business training programs in Canada.

Douglas College is the largest public awarding school in British Columbia Canada. It has nearly 17,000 students, including internationals.

The awards were granted on the criteria of: Business Achievement, Differential Products and Services, Operational, Financial and Marketing Strategies, as well as Community Service and Environmental Impact.

Seven categories were awarded during a special ceremony. The agency’s honour to have been selected as a winner as a company that was created and started with a virtual remote service company (home-based) was recognized as a merit and special achievement for the international agency as it has crossed borders that have gone far.  In addition to serving Canadians who wish to study Spanish or other languages abroad, the agency provides services to foreigners from more than 30 countries around the world who intend and dream of emigrating to Canada and/or studying or working legally in Canada and other countries around the world. 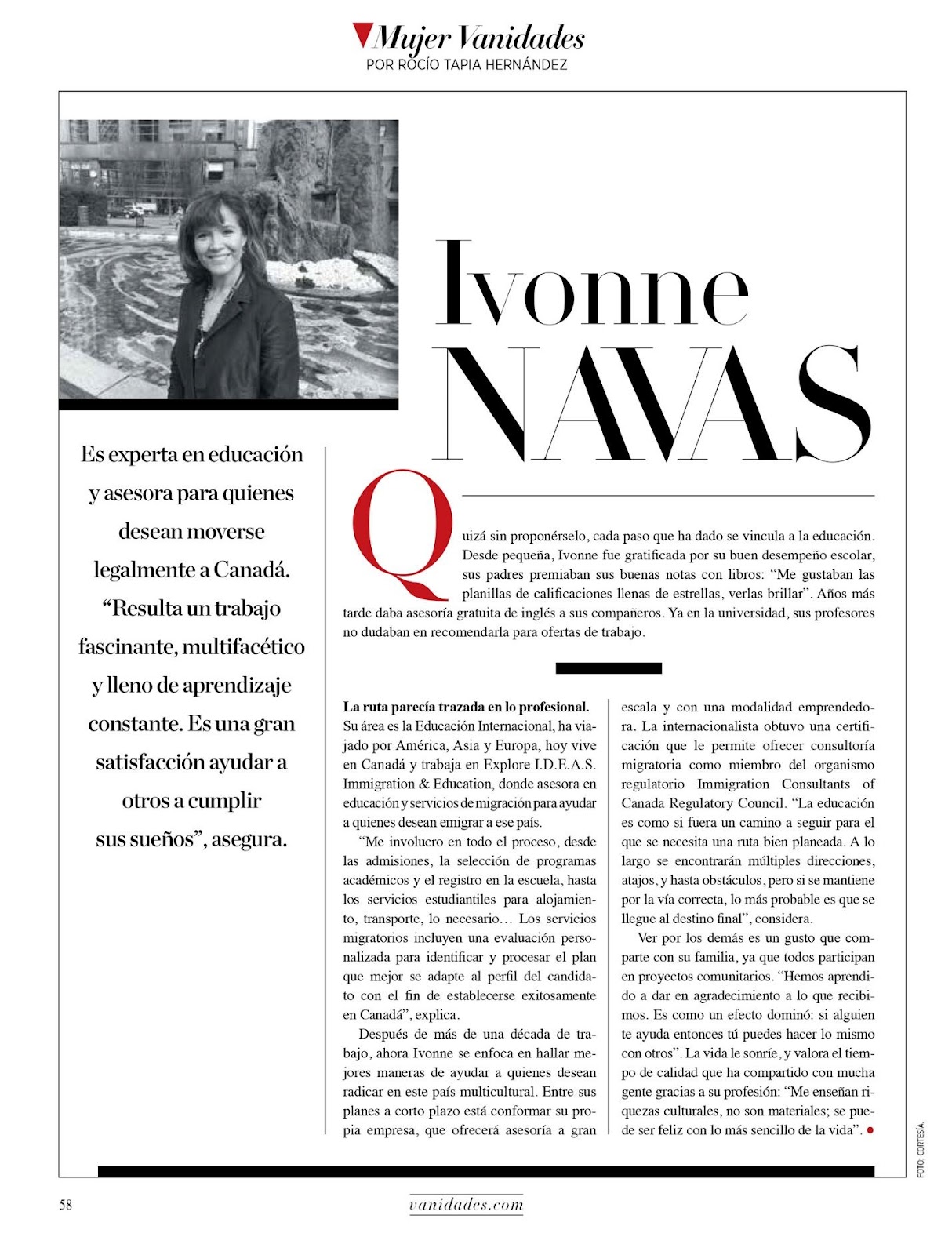 The Mexican magazine “Vanidades”(Vanities) dedicated a space in its section “MUJER VANIDADES” to Ivonne Navas in recognition of her academic, professional career and plans for an entrepreneurial modality.  As a commitment, in the same year her company was established.

Vanidades is one of the most popular women’s magazines in the Spanish language market.

Published by editorial Televisa throughout the United States and Latin America.

The “Dress for Success” Organization (DFS) 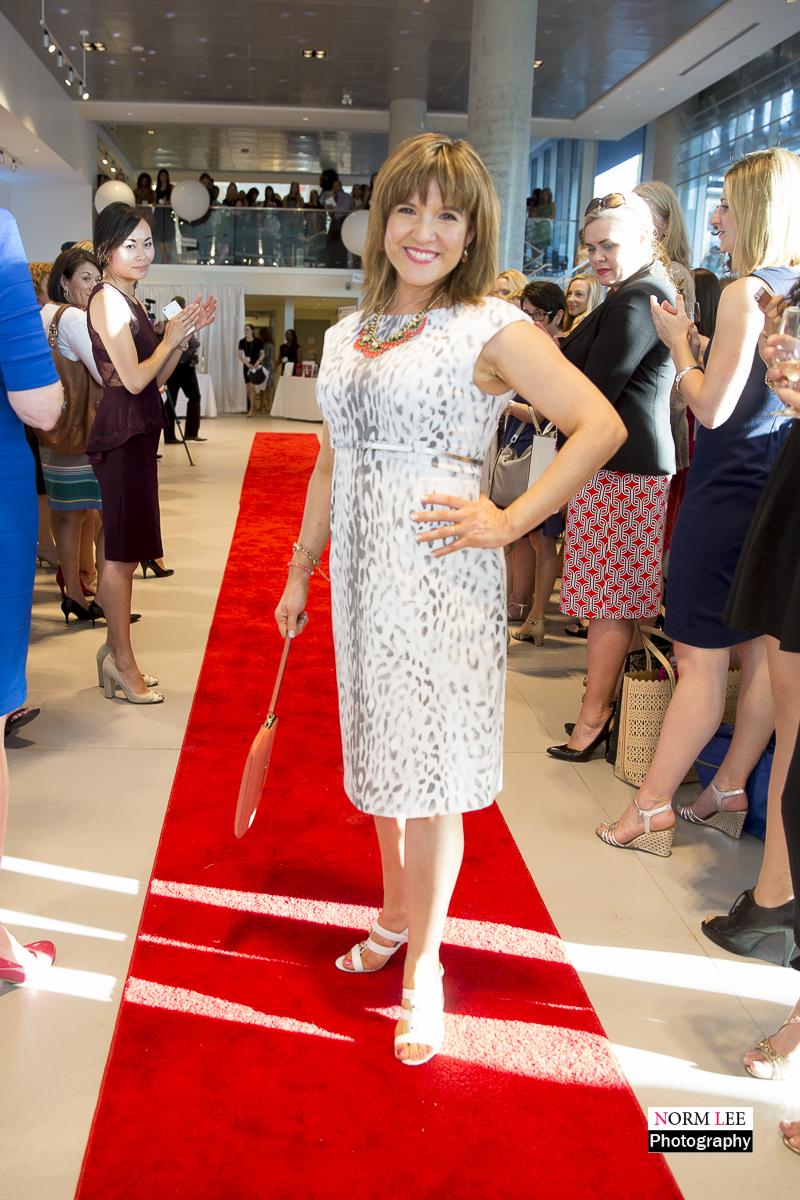 Ivonne Navas participated in “Dress for Success” events as a motivational speaker, mentor, inspirational figure (role model) and red carpet model to support the fundraising efforts and the campaign and event of “IMPACT 360” EMPOWERING WOMEN.

“Dress for Success” promotes that every woman, regardless of her origin and life circumstances, deserves the opportunity to grow, develop and succeed in today’s world.